Over a thirty-six hour period in Los Angeles, a handful of disparate people's lives intertwine as they deal with the tense race relations that belie life in the city. Among the players are: the Caucasian district attorney, who uses race as a political card; his Caucasian wife, who, having recently been carjacked by two black men, believes that her stereotypical views of non-whites is justified and cannot be considered racism; the two black carjackers who use their race both to their advantage and as an excuse; partnered Caucasian police constables, one who is a racist and uses his authority to harass non-whites, and the other who hates his partner because of those racist views, but who may have the same underlying values in his subconscious; a black film director and his black wife, who believes her husband doesn't support their black background enough, especially in light of an incident with the racist white cop; partnered police detectives and sometimes lovers, one Hispanic female and the other black male, the latter who is dealing with a drugged out mother that feels he isn't concerned enough about taking care of family; an East Asian man who is run over but who is hiding some valuable cargo in the back of his van; a Persian store owner, who feels he isn't getting satisfaction from American society when his store is robbed time and time again; and a Hispanic locksmith, who just wants to keep his family, especially his young daughter, safe in a seemingly unsafe world. - synopsis from IMDB 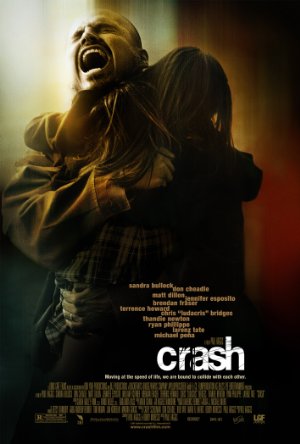