Following his parents' death in Africa, John Clayton has been be raised by an ape, was known by the name Tarzan, but eventually left Africa and for his parents' home in England, along with the woman he fell in love with and married, Jane Porter. He is asked by Belgian King Leopold to go to Africa to see what he has done there to help the country. Initially, he refuses. But an American, George Washington Williams, wants him to accept so he can accompany him. He says that Leopold might be committing all sorts of atrocities to achieve his goal, like slavery. Clayton agrees and his wife insists that she accompany him because she misses Africa. When they arrive, a man named Rom, who works for Leopold, attacks their village and captures Tarzan and Jane. With Washington's help he escapes and sets out to rescue Jane by going across the jungle. Washington joins him despite being told that he might not make it. - synopsis from IMDB

Visiting The Legend of Tarzan was a spur of the moment thing, but a decision I don’t regret. Judging from the cast, I had hoped for a decent production and was not disappointed.

The opening scene makes clear that a lot of care has gone into this movie. The music sets the scene straight away and continues to complement the story quite well.

More striking though is that there is a well struck balance. The movie contains some humour, some drama, some action, none of which get in the way of the story itself. It’s not trying to be all things at once, just to use those elements to take us along.

The animated characters are amazing. The quality of images has really taken a leap in recent years and it shows itself in all its glory here. Beautiful animals, primarily monkeys, but also hippos and elephants, fill the screen spectacularly in scenery that’s splendid in its own right.

Go have a look at Tarzan. You’ll like it. 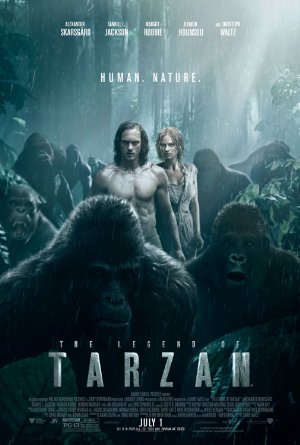