Colonel Katherine Powell is a UK-based military officer in command of a top secret drone operation to capture terrorists in Kenya. Through remote surveillance and on-the-ground intel, Powell discovers the targets are planning a suicide bombing and the mission escalates from capture to kill. But as American pilot Steve Watts (Aaron Paul) is about to engage, a nine-year old girl enters the kill zone triggering an international dispute, reaching the highest levels of US and British government, over the moral, political, and personal implications of modern warfare. - synopsis from IMDB

Eye in the Sky is one of those movies that started with a very good concept, but fails to deliver. It’s a nice attempt to address the moral, political and military balance to be struck for modern-day warfare. The focus of the movie is not on the act or military intervention itself, but the process leading up to it. The movie tries to illustrate the many, often contrasting interests involved.

However, the dramatic effect is not really gripping. We follow along with the story, but are not enticed. Add to that the rather strange and one-sided depiction of the U.S. involvement and the end product loses its interesting appeal. 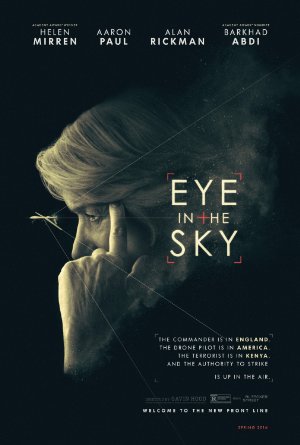