Some time after the Civil War, a stagecoach hurtles through the wintry Wyoming landscape. Bounty hunter John Ruth and his fugitive captive Daisy Domergue race towards the town of Red Rock, where Ruth will bring Daisy to justice. Along the road, they encounter Major Marquis Warren (an infamous bounty hunter) and Chris Mannix (a man who claims to be Red Rock's new sheriff). Lost in a blizzard, the bunch seeks refuge at Minnie's Haberdashery. When they arrive they are greeted by unfamiliar faces: Bob, who claims to be taking care of the place while Minnie is gone; Oswaldo Mobray, the hangman of Red Rock; Joe Gage, a cow puncher; and confederate general Sanford Smithers. As the storm overtakes the mountainside, the eight travelers come to learn that they might not make it to Red Rock after all... - synopsis from IMDB

Tarantino’s latest movie is most definitely a Tarantino, but it’s not special the way many of his previous movies are.

I like movies that are different. That’s why I tend to like Tarantino’s movies too. It’s almost impossible not to compare this one to those that came before. The Hateful Eight certainly has the same feeling to it that we’ve become familiar with. It also has many of the same faces we’ve become accustomed to. But this time, it doesn’t work out as well.

The pace is slow. Although it may not qualify as glacial, it’s really slow. Don’t get me wrong, it’s one of the movie’s main assets. Being slow these days is daring. If you can pull it off, it adds something. The suspense is palpable and never-ending. That last point is where things go wrong. You can have all the suspense you like and drag it out as long as you feel is needed, but the tension needs to be released at some point and develop into something spectacular or interesting. That point never really arrives.

When it does arrive, it’s never really there. Maybe at this point you’re not really expecting anything to happen anymore and your brain just won’t kick into gear; maybe it’s not balanced to the suspense; maybe the action is simply too predictable. All in all, it left me thinking: “Well, it ended.” The ending itself is too long-winded. By that time, we get the point. Again, predictable.

That this movie is not at the same level as the others, is well illustrated by a single point in the story. The style switches quite abruptly to an editorialized narrator to point out some detail that just happened in a funny way. At this point, I’m intrigued. Soon after however, we are thrown back to the original style and nothing similar is done for the rest of the movie. If you’re going to be quirky, be quirky. But dropping in a single moment of quirky and not developing it makes it out of place and pretty awkward. It doesn’t fit in and makes the viewer uncomfortable.

In between the extremely slow beginning (which is fantastic) and the tediously long epilogue, I found myself waiting for that eruption of action, gore or quirky plot twist I’ve come to expect in Tarantino’s movies. I was waiting for that one moment of “wow!” or “no, really?” or “heck, yeah!!!”. Yes, there is development of the story, but the outcome is not worth all that waiting and wondering where this all is leading. 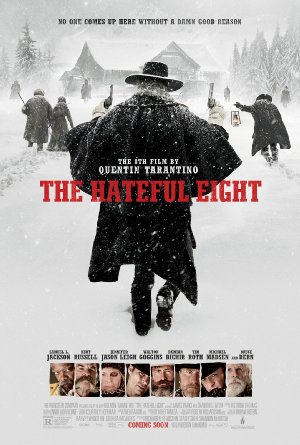