It's Anna's birthday and Elsa plans to throw her the perfect surprise party with the help of Kristoff and Olaf. However, after planning the huge party and as Anna is being led on a party treasure hunt, Elsa finds that she has caught a cold. She starts sneezing and produces a group of small, cute snow people, much like Olaf, with each sneeze. After some near-misses, a very exhausted Elsa finally makes it with Anna to the courtyard where the party has been arranged. It is a big hit, and at last Anna manages to convince Elsa into letting her to lead her to bed and take care of her. Meanwhile, Olaf has taken the tiny snow creatures under his wing and takes them to Elsa's ice castle with the help of Kristoff. - synopsis from IMDB

Here’s a production to make sure the kids keep urging their parents to buy franchise merchandise before the fad wears off and the inevitable sequel is actually ready. Frozen Fever takes us back to Anna and Elsa for no more than 8 minutes, but fails to convey the magical feeling of its predecessor. Ah well, it fit in just nicely before dinner. 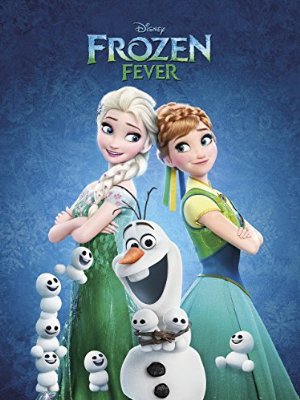