THE BOXTROLLS are a community of quirky, mischievous creatures who have lovingly raised an orphaned human boy named Eggs in the amazing cavernous home they've built beneath the streets of a city called Cheesebridge. The story is about a young orphaned boy raised by underground cave-dwelling trash collectors who tries to save his friends from an evil exterminator, the town's villain, Archibald Snatcher. When Snatcher comes up with a plot to get rid of the Boxtrolls. Eggs decides to venture above ground and into the light, where he meets and teams up with fabulously feisty Winnie. Together, they devise a daring plan to save The BoxTrolls family. The film is based upon the children's novel 'Here Be Monsters' by Alan Snow. - synopsis from IMDB

As movies go, The Boxtrolls is a weird one. You have to admire the amount of work that went into the production, simply by the way the movie was created. Sadly, it just doesn’t work for me.

I rarely stop watching a movie before the credits. This time around, it took me two sittings to get through it. I think the main problem is that there were too many objectives or styles intended and that as a result none of them really worked out.

First, this world and the way it’s displayed is quirky. Now, I like quirky. But here it’s not an interesting form of quirky, it’s just off. It doesn’t feel like a consistent, believable form.

It also tries to be funny. Except the jokes are predictable and actually pretty poor most of the time. And the voice acting feels exaggerated.

Children are supposed to find it interesting and no doubt, some of them do. At the same time, there are adult themes woven into the story that never really develop.

To sum up, The Boxtrolls has a lot of nice ideas, but wildly chases them all leaving the viewer confused. Shame really. Cheese, anyone? 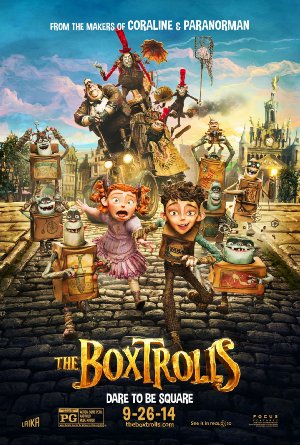