Set in a futuristic dystopia where society is divided into five factions that each represent a different virtue, teenagers have to decide if they want to stay in their faction or switch to another - for the rest of their lives. Tris Prior makes a choice that surprises everyone. Then Tris and her fellow faction-members have to live through a highly competitive initiation process to live out the choice they have made. They must undergo extreme physical and intense psychological tests, that transform them all. But Tris has a secret that she is Divergent, which means she doesn't fit into any one group. If anyone knew, it would mean a certain death. As she discovers a growing conflict that threatens to unravel her seemingly peaceful society, this secret might help her save the people she loves... or it might destroy her. - synopsis from IMDB

Even though Divergent contains the inevitable cliches here and there, its refreshing take on the subject earned it an above-average rating. At least it’s not riddled with the common propaganda we’ve become used to in most mainstream productions. I suppose the original book didn’t provide sufficient wriggling space. Hooray for books!

In this world of factions, everybody must choose one - for life. But what if none really suits you? Anyone who defies the status quo is perceived as a threat to the entire system. Divergent touches on familiar topics, but without much overdramatism and with plenty of action and entertainment along the way. I thought it was rather funny to see that most factions don’t appear to be particularly good at what they do. That seems like a fair assessment of how such a system might end up.

With the main characters being those that don’t really fit in, it’s expected we see how ruinous any rigidly restrictive social system can be for divergents. Still, fortunately, the story focuses mainly on illustrating that without trying to imprint an opinion on what’s best. As for the people in Divergent’s world, some simply thrive where others fail. Similarly, you may get different things from this movie. Me, I simply enjoyed it. 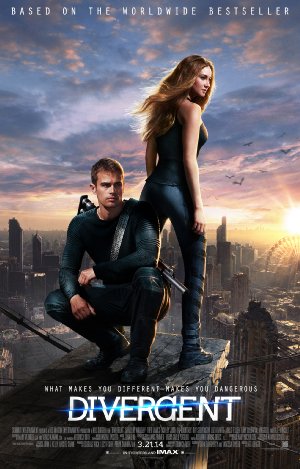