The once hideous ogre Shrek is now living a good life with wife Fiona and his three children. But he soon has a meltdown in front of them and his friends during his kids' birthday party. He suddenly wants to be a real ogre like he was before he ever met Fiona. So he turns to devious deal maker Rumplestiltskin for help. At first, Shrek lives the life he once lost and everything is good. But he soon finds out that he has been set up by Rumplestiltskin, who now rules the land with an ironed fist. Teaming with friends Donkey, Fiona and Puss in Boots, Shrek is in for the fight of his life as he tries to get his life back before time runs out. - synopsis from IMDB

As Hollywood continues to run out of scripts, money and most importantly, ideas, the next franchise to be dusted off and sprinkled with some 3D specialness happens to be Shrek. This time we’re back at the swamp where life’s all peachy, but from our Ogre friend’s point of view, there should be more time for mudbaths. That figures.

Best of all, the humor is finally back. I think the original Shrek may be one of the films I have actually watched most often, for the simple reason I couldn’t get enough of Shrek and Donkey on “another whirlwind adventure”. “Can I whistle? Can I hum it? On the road again…” That just got me each time. The second and particularly the third movie introduced too many new characters of barely the same quality. Except for Puss in boots, of course. Just one new character in this movie and a job well done in a unique addition to the cast. Finally, the laughs are back and show again that Shrek is mainly intended for grown-ups, despite all the fairytales and cute lil’ piggies. “Zis little piggy wants to goo hooome’ [gay German accent].

The story is fetched from far far away, so it’s actually rather frustrating to watch, as it’s painfully obvious where everything is going from the get-go. Once you look past that though, you realize this is just an entertainment show for which the story is a by-product. And in this edition, the music is at the forefront again. Some excellent choices this time ‘round. 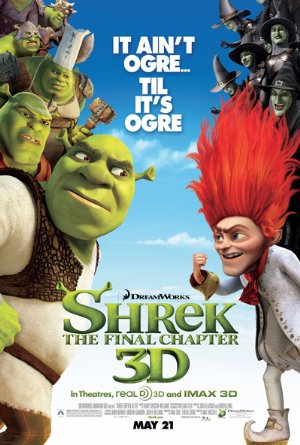