Ken Castle is extremely rich, popular and powerful since he invented and started exploiting the virtual online parallel reality games, in which people can either pay as user or be paid as 'actor' in a system of mind-control. The ultimate version, Slayers, fields death row convicts as gladiators in a desperate dim bid for survival, which no-one made yet. The champion, John 'Kable' Tillman, was scheduled to die just before he'ld gain release, but he persuades his teenage 'handler' to hand over the reins so he can fully use his talents and experience. Thus Kable escapes to freedom, only to be chased illegally by Castle's men, yet fights back all the way to his HQ and challenges his evil hidden plans. - synopsis from IMDB

There goes one and a half hours of my life I’ll never get back. And I feel confident in saying it’s been a while since a movie failed so miserably to bring anything interesting to the table.

Sure, there have been plenty of rubbish movies in the last couple of years, but Gamer seems to think it’s actually approaching its “people control people” in a convincing and intriguing way. But in all areas, acting, storyline, staging, music, effects, it comes short of touching on the believable. 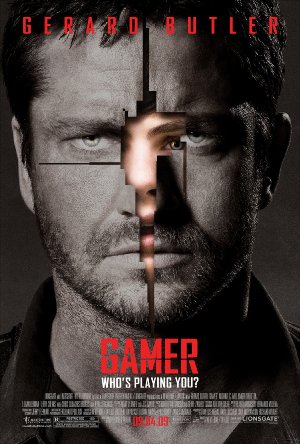