This is the story of the last few years of the notorious bank robber John Dillinger. He loved what he did and could imagine little else that would make him happier. Living openly in 1930s Chicago, he had the run of the city with little fear of reprisals from the authorities. It's there that he meets Billie Frechette with whom he falls deeply in love. In parallel we meet Melvin Purvis, the FBI agent who would eventually track Dillinger down. The FBI was is in its early days and Director J. Edgar Hoover was keen to promote the clean cut image that so dominated the organization through his lifetime. Purvis realizes that if he is going to get Dillinger, he will have to use street tactics and imports appropriate men with police training. Dillinger is eventually betrayed by an acquaintance who tells the authorities just where to find him on a given night. - synopsis from IMDB

A step back into history for the setting of this movie is accompanied by a step back in moviemaking - in the good sense. Despite what the trailer may suggest, this cops & robbers movie is not an action movie as we so often see nowadays. For that, Public Enemies is far too much concerned with the scenery than with the events. Although all of the scenes in the trailer are obviously from the movie, some may find the general feeling quite different from that string of scenes and not entirely what they entered the theatre for. If so however, they have been tricked inside, but at the same time tricked into something that is much more than they expected. This is much more timid and relaxed story telling. And it’s a lot more interesting because of that: we now have the time to enjoy some good stuff.

At a leisurely pace, we are introduced into the 1930s world of an ongoing manhunt for a gang of bank robbers led by the notorious John Dillinger. And by notorious, I of course mean hugely popular, because with a wink to present times, Mann shows us the public heroes made out of criminals when an economic downturn sparks anger toward bankers and hood-esque efforts against them are welcomed as a public reflex.

With a taste for the quirky, this is a refreshing performance from Depp. Not only do we suddenly see something else than his greatest hits of prancing but he also retains the madman undertone in his character. Sure, this is a crook, a ruthless one at that, but on the outside he’s cool, charming, even friendly and a real gentleman. He’ll kill you in a wink, but it’ll be pleasant and well-mannered! You can feel the tension around this man and the public just love his arrogant and untouchable attitude. Even when he gets caught time and again.

Like most real stories, the ending here is rather sudden and unspectacular. Which is precisely what I thought was so enjoyable: some action, some drama and a whole lot of muffled humor. I’m just a sucker for a good baddy I guess. 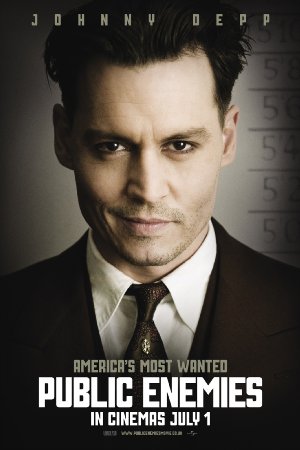