In Nazi Germany during World War II, as the tide turned in favor of The Allies, a cadre of senior German officers and politicians desperately plot to topple the Nazi regime before the nation is crushed in a near-inevitable defeat. To this end, Colonel Claus von Stauffenberg, an Army officer convinced he must save Germany from Hitler, is recruited to mastermind a real plan. To do so, he arranges for the internal emergency measure, Operation: Valkyrie, to be changed to enable his fellows to seize control of Berlin after the assassination of the Fuhrer. However, even as the plan is put into action, a combination of bad luck and human failings conspire on their own to create a tragedy that would prolong the greater one gripping Europe. - synopsis from IMDB

I’m not a big Tom Cruise fan. Even so, I must admit I was rather charmed watching Valkyrie. And it wasn’t all Tom’s doing.

This movie boasts quite a few well-known actors (including one of my personal favorites). Fortunately, it pays off. Valkyrie brings a thrilling account of historical events that need no juicing up by screenwriters, just good actors. The only surprise to me was that not a single character did anything unexpected. Some stuff. Only in the real world, apparently.

Although it’s a decent movie, there are still some shortcomings. For some odd reason, we never get a proper explanation of the crucial elements in the coup’s failing. I happened to catch a documentary on Discovery Channel the day after (coincidence? I think not.) that was more helpful. I also feel such a composition to the end could have added to the dramatic climax of the movie. As it happens, there is little climax at all. Chaos doesn’t count for that (and the chaos and confusion is not one of this movie’s weaknesses).

This is mainly because Valkyrie fails to choose an identity as so many other movies do. And, similarly to these other movies, cannot be all at once. Is this a historical recital, an action movie or maybe an emotional drama? This means we see von Stauffenberg’s family, but the emotional impact of the choices he makes, for himself but inevitably for them as well is not eleborated on. Did he have his moments of doubt? Did his wife protest his actions? We’ll never know. Admittedly, we really don’t need another WWII action movie, so we’ll let that genre slide. Leaving the docudramas to Discovery, I think we want to know more about this Stauffenberg fellow. But I guess there’s little chance of a sequel… 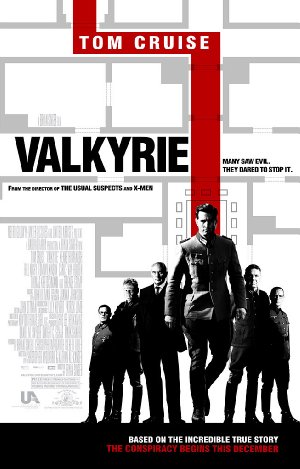