In a near future, the mercenary Toorop is hired by the powerful criminal Gorsky to take a woman named Aurora from a Noelite Convent in Central Asia to New York. In return, he will receive a large amount of money and a clear passport. Toorop joins Aurora and her guardian Sister Rebeka as they cross the dangerous Russian landscape chased by mercenaries that also want Aurora. On their journey, Toorop discovers that Aurora has special abilities and once in New York, they see on the news that the Noelite Convent has just been bombed. When Aurora discloses that she is a virgin and pregnant with twins, Toorop realizes that there is something sinister behind his mission and that he and Sister Rebeka are not part of Gorsky's plans. - synopsis from IMDB

You know that kind of movie that has great potential but sadly just can’t pull it off in the end? This isn’t one of those. There was no potential to start with, let alone any serious attempt to leverage it.

You know that kind of movie where the music score is simply awesome, to go with the style of the movie? It draws you into the scene, as if you were there yourself and the sounds around you were a magnificently balanced and dramatised masterpiece of harmonious and rhythmic perfection. This isn’t one of those. I honestly couldn’t tell you whether it even had music.

You know that kind of movie where you don’t care about the stuttering story but just give it a go because the action scenes are great and some good ol’ “don’t you mess with me, you &^#@_)*^@!^#” is just what you’re feeling like? This isn’t one of those. There are no great action scenes. If you find a story, let me know. On second thoughts, never mind.

You know that kind of movie that can pull off a couple of cheap references to biblical matters because it’s not that big a part of the story anyway and nobody’s trying to be clever by lecturing you about wrong and right? This isn’t one of those. How they come up with this stuff is beyond me. It’s not even worth one of those cute <spoiler> thingies.

This movie isn’t any of those things. Quite frankly, this isn’t much of a movie at all. I guess the average Vin Diesel fan (is there such a thing?) doesn’t exactly hand out points for acting skills. Even so, I’m not one to complain about that kind of actor: they can be highly entertaining in certain roles (don’t you just love type casting?). Diesel really seems lost lately. In this case, he appears to have projected the outline of his character on to his acting. There’s obviously not much going on and he looks rather beat down. Not exactly a champion of the mercenary trade.

You know that kind of movie that nobody can shut up about it and you should go and see? Exactly. This isn’t one of those. 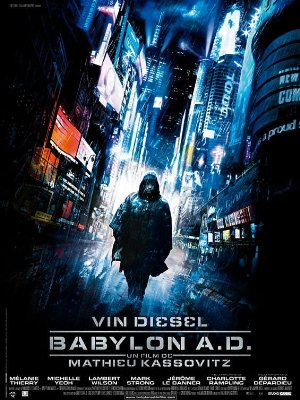